Which Bow for the 21st Century?

The wooden bows that are still widely used today stem from a time when pure gut strings with no windings were played. The first steel strings were made at the end of the 19th Century, when metal windings became available which allowed to play much more powerful. They became necessary because concerts were no longer played in the small halls of the nobility but in the new large public halls that were being build in the western world at the time.

Steel strings became possible only with the technological advances at the end of the 19th Century high tensile steel wires became available (which is why at the time the grand piano evolved). For the winding on the lower strings copper wire was used, which was mass produced for cables when electricity was the great thing in big modern cities.

For these kinds of strings, wooden bows are actually too soft and too flexible, so the stick bottoms out on the strings in fortissimo and on double stops: the bow hairs and the stick can be damaged and the sound gets dirty. A possible solution is the use of a stronger stick but that would have made the bows significantly heavier. The violin bow would be much like a viola bow in order to offer sufficient elasticity (respectively resiliency). But how would you play Bach and Mozart with such a heavy bow?

In 1797 the English engineer Henry Maudslay applied for a patent on the first efficient screw-cutting lathe. Until then screws were difficult to make and really expensive which is why, until about 1800, only rich people could afford a bow with a screw while most musicians were using bows with clip in frogs. These bows, that are often (falsely) considered as primitive baroque bows were in fact the usual bows through the Classic and well into the Romantic era until they were replaced during the first half of the 19th Century by a new type of bow that was developed by Francoise Xavier Tourte around 1800. Because he enjoyed great success with this bow (he made about 5,000 bows in his life) it was soon copied by many other bowmakers. Tourte and his followers designed the bow to match the strings that were being used during the 19th Century, which were predominantly pure gut strings. Metal windings were too expensive until about 1900. By then electricity became the big thing and copper wire was mass produced for cables. This copper wire was then used for winding the lower strings to give them more punch. At the same time the quality of steel improved to the point where thin wires could be made strong enough to be used as violin E-strings. (It was also the time that the grand piano was developed around the new “piano wire”.) 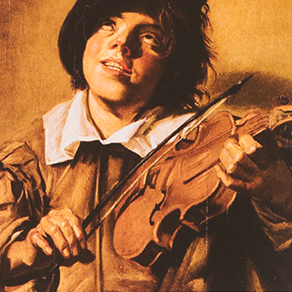 These new strings were much heavier than gut strings and allowed a much stronger technique. While pure gut violin strings can stand a force of only 2 Newton (200 grams), metal wound strings can take about 3 Newton. But that was not what the Tourte bows were designed for. Since then players have had to develop a somewhat awkward and difficult technique to work with this uneven match of strong strings and soft bows. 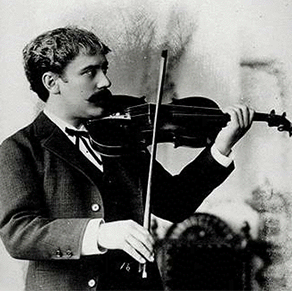 All through the 19th and 20th centuries great efforts were made to develop a stronger bow. Vuillaume developed a metal tube bow of wich his workshop made and sold several thousand pieces and was also the preferred bow of Nicolo Paganini. This and later metal bows proved to be too fragile because the walls were only paper-thin. 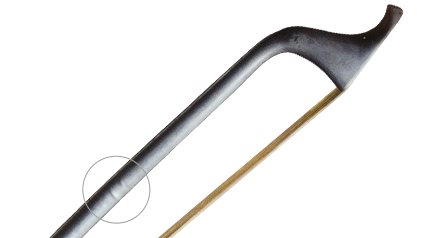 When Bernd Müsing began to look into this problem, it was clear that only a tube made from high-density carbon fiber could provide significant improvements over pernambuco. Other simpler carbon bows did not offer the right elasticity and had too much high frequency damping, drawing a dull sound lacking badly in overtones.

A violin bow with a clip in frog like those used until the early 19th Century weighs only about 40 grams. Its agility allows Bach and Mozart to be played with the appropriate delicacy. The heavy Romantic “Tourte” bows ended up with a weight of about 60 grams. We found the ideal weight that allows a violinist to play the entire repertoire properly to be half way between the two extremes, at around 50 grams. 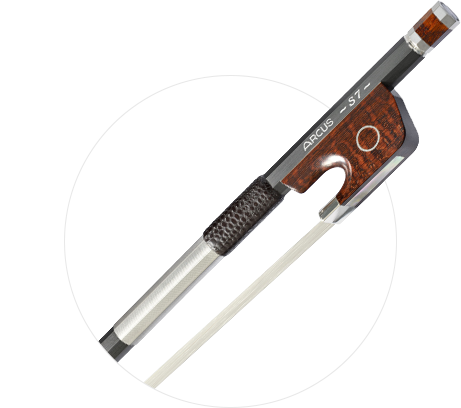 Arcus violin bow S7
But What About the Sound?

Most people think of wood as an especially resonant material - which it isn’t. It was the only light construction material available during the time that stringed instruments were developed. Carbon fiber components can have much better resonance characteristics than wooden parts - if designed and made properly. Cheap carbon bows are made with more epoxy resin than carbon fibers. The epoxy acts like a high frequency filter which renders the sound of such bows rather dull, lacking badly in overtones. The Arcus sticks contain only half as much epoxy. In combination with the hollowness of the stick this results in a resonance quality that surpasses even the finest pernambuco wood.

The vast majority of wooden bows that were made are long lost through wear and fatigue. Sweat degrades the wood, the screw wears the bore from the inside, metal strings leave dents in the shaft. Worst of all, the continuous vibrations of the stick wear out the material so that sooner or later the stick fails, usually at the thinnest part directly behind the head.

The Arcus high-density carbon fiber stick is not only 10 times stronger, but also immune to changes in humidity and its surface is scratch-proof. They will never bend or lose their camber. The metal bearings protect the stick against the screw and ensure its ease of function. We offer a 30 year warranty for the stick but for all we know all our bows will still be being played hundreds of years from now when all wooden bows will either be broken or safely stored in museums or private collections.

break resistance
ARCUS
wood
The End of Fatigue and Pain in Shoulder, Hand and Arm

Within the first year of Arcus bow production several musicians discovered that the Arcus bows apparently solved ergonomic problems including pain and fatigue in the thump, wrist, elbow and shoulder of the bow arm. We found that the 50 Hz low frequency vibration of traditional bows are the cause of these problems. The reduced weight and increased stiffness of the Arcus sticks shift their fundamental resonance to 100 Hz (one octave higher), which seems to be well outside the dangerous frequency range. 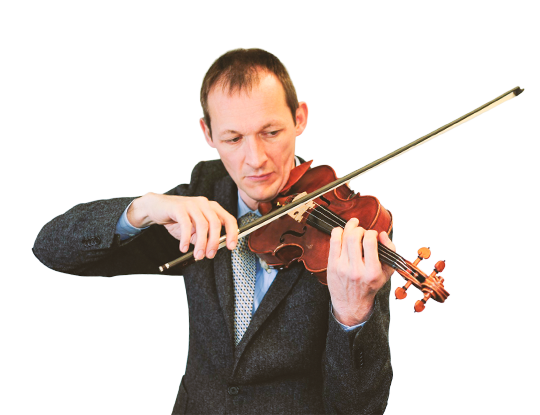 If you experience a bow arm fatigue during long concerts or rehearsals, or even suffer from pain, please try one of our bows. Chances are it will bring instant relief and it may even solve these problems once and for all. If you know a friend, colleague or student with a problem, please tell him about the unique solution that Arcus bows provide.

Most players who own an Arcus bow play it exclusively. The most important reason is probably that no conventional bows offer the same variability in sound and technique. An Arcus enhances the freedom of interpretation and allows to play with increased precision and clarity. The articulation is crisp and clear. Perfect intonation in the upper registers is also more easy to achieve due to the clear and transparent sound they draw. The sound of the lower strings comes out more melodic. Arpeggio and fast string crossings are easier to execute because the bows are lighter and perfectly balanced. Even col-legno doesn’t need to trouble you any further, as the stick’s surface is harder than the metal winding of the strings. Finally you can play at full power without damaging the stick or the bow hair.

Which one’s the right one for me?